Billiard Table vs. Pool Table – What is the difference?

However, they have slight technical differences that set them apart. The biggest difference between these two games is the size of the tables involved and the make.

Here are a few differences between billiard tables and pool tables that set them apart.

What Is the Difference Between a Billiard Table and a Pool Table?

Since pool and billiard are two different games, there is also a difference in the pool table and the billiard table.

Billiards is the predecessor to pool and snooker. Hence, it’s the game that started it all.

The customary dimensions of a billiard table are usually 9.3 feet by 4.7 feet. US tables may also have dimensions of 10 feet by 5 feet. This ratio of 2:1 is standard for all billiards tables. 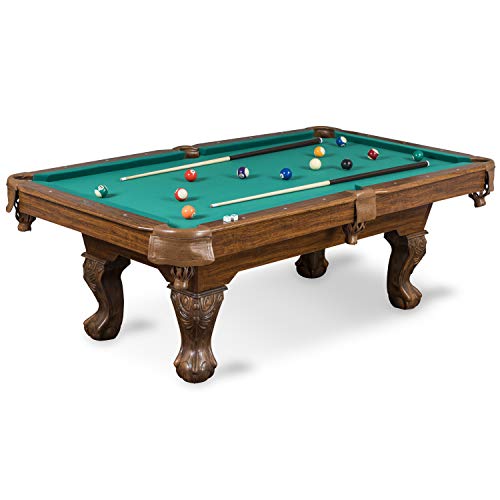 Billiard tables are also covered in 100% worsted wool, which is a smooth, wrinkle-free, and compact fabric. This is also referred to as baize. Pool and snooker tables use felt. Hence, the surface area measures 112 inches by 56 inches approximately.

Billiards, in the traditional sense, also doesn’t have any pockets since the objective in billiards isn’t to sink the ball. The cue ball has to hit the rails at least three times and then contact the second ball in the game.

Billiard balls are also slightly larger than the ones used in a game of pool. They have a diameter of up to 2-7/16 inches and they weigh between 7.20 and 7.80 ounces. This is equivalent to the weight of the pool balls as well, but the size is larger.

Pool tables have around 6 pockets and they’re the ones you usually see in bars and films and cartoons. Four of these pickets are located at each corner of the table. The other two are located at the center of the longer sides 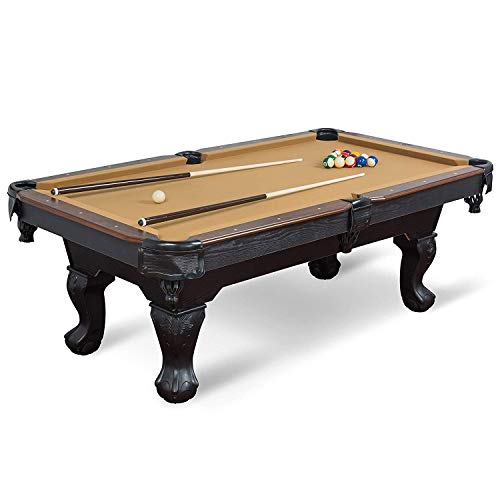 Pool tables come in three different sizes: 7 foot, 8 foot, and 9 foot. The smallest sizes are usually for home play and the larger ones are used in tournaments.

Combo pool tables which are comparatively newer come in 6 footers as well. However, there are smaller pool tables like these in the US/UK. There, the entire pool scene developed in pubs so they required smaller tables due to overcrowding.

Pool tables are covered in felt in direct contrast to the worsted wool of the Billiards tables.

Snooker tables in the US are usually smaller and the ones in Europe can be as big as 12 feet by 6 feet. These are larger than pool tables and billiards tables. They can also measure as small as 10 feet by five feet.

The snooker tables have the smallest pockets of all and they are lower in height than the other two tables. They have 21 balls to play with instead of the 15 usually found in billiards and the 8 or 9 in a pool.

Even the cue sticks used in a game of snooker are much wider and longer than pool or billiard cues. The butt-end-to-ferrule ratio for the cues is 2/3.

Differences Between Billiards and Pool Games

Billiards and Pool may seem to be very similar to the casual observer, but they’re wildly different in their subtleties.

Billiard sports have been popular since the 15th Century when they began as a derivation of croquet and other lawn games. It evolved as a sport alongside golf which was also derived from lawn sports. It finally became a sport of its own as the 20th century approached.

On the other hand, Pool became popular in the 1800s as it evolved from Billiards itself. However, since its main difference from Billiards is the inclusion of pockets, this dates back to the earliest Billiards days.

The objective of Billiards is to score most points or a certain number of points within a fixed timeframe. In the case of the latter, the points are fixed before the commencement of the game.

Since there are no pockets in billiards, the game is usually centered on hitting the rails with the cue ball. Then it’s up to the player to hit the target ball.

For Pool, the objective is to sink as many balls as possible with the cue ball. The only exception to this is Russian Billiards. This game is similar to the pool because it awards points for pocketing cue balls.

The Billiards balls are usually available as a set of 2 cue balls. There is one object ball here. However, other games call for 2 object balls.

For pool, the balls come as a set of 8 or 9 balls and a cue ball. They can either be striped or solid balls. All the games don’t make use of suit markings though.

Billiard balls have a diameter of around 61.5mm, and they weigh between 200 and 225 grams.

For the pool, the balls are internationally standardized with a diameter of 2.25. They are of the same weight as billiard balls. However, British-style balls are smaller in diameter (2 inches).

The cloth on the billiards table is called baize. It’s a type of worsted wool and is usually green. It represents the lawn that the game evolved from. However, today, there are many different colors available for the game.

For the pool, the table is covered in baize, but they are usually made of a different material. The tables placed in homes or pubs contain 100% synthetic materials. This means that these tables are available in different colors.

There is no need for a rack in most Billiards games.

Billiard is played with a cue that is reminiscent of the golf club or the croquet mallet. It was even called the mace in the mid-1800s. Modern billiard cues are slicker and wooden. They are handmade and have inlaid or other decorations.

Pool cues are a little longer though, and they have smaller tips. This helps the pool game proceed much faster. They are longer than billiard cues due to the power needed to be exerted during the game as well.

Below are some common pool and billiard games you’ll see people playing most of the time.

This is the classic game that was first invented. It involves using a cue ball to contact a single ball of the two object balls.

There is a minimum of three rail cushions that have to be contacted and then the remaining ball.

This is the same as three-cushion billiards except that only a single cushion has to be contacted between the first and second target balls.

Players have to pick a suit and try to pocket all the balls of that suit. Then they have to pocket the 8-ball. They also have to prevent their opponents from doing the same.

This is played with object balls that are numbered from 1 to 9. No suits are involved here and players have to pocket the balls in numerical order. In most games, the ball in the lowest numerical order is pocketed first.

Pool and billiard tables are quite similar, but they have subtle differences that help them stand apart.

Can You Put a Pool Table Outside?

ThePoolAcademy.com is a participant in the Amazon Services LLC Associates Program, an affiliate advertising program designed to provide a means for sites to earn advertising fees by advertising and linking to Amazon.com